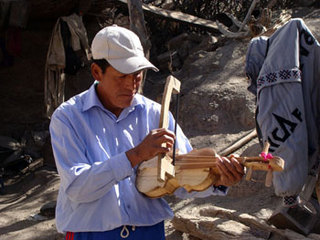 The violin, a musical instrument brought by the conquerors and European missionaries, has a strong presence among peasants and many indigenous villages although facing the risk of disappearing in lots of them. If the latter ever took place, along with the violin a large variety of execution techniques, repertoires, construction techniques, etc., would disappear; in other words, a whole constellation of knowledge and aesthetics that every indigenous village and peasant have been building in their long relation with this instrument.

A quick look at the violin in Bolivia, shows the existence of a large diversity of shapes, construction materials, use calendars and constructing, due to different shapes that in each case has been included inside the cultural repertoires and concrete rituals.

In the case of the “Chapaco” violin (European shape) its use is “round year”. In fact, peasants use it in employers festivities during the whole year, Christmas time, and for brand work at corrals. In this region, the use of this instrument differentiates because of the strings that are played, which are different. Its use however, intensifies since Eastern until the Cross festivity (May 3rd). Even though at present the countryside has been invaded by a large amount of Chinese violins, the traditional violin used to be the “pascuero”; nevertheless, there was another one called “suyao”, which was made of thin sheets of pine wood. These ancient violins were, according to violinist Rodolfo Jerez, “like ponchos because of the different colors they had”. Another type of violin used by apprentices was made of reed.

The use of the Guarani violin begins once the Arete (Ara-ette) festivity is concluded. Clearly it starts in Eastern (March-April) and lasts until the next Arete period. During Eastern time, its repertoires are associated to the songs of “Areruya” (aleluya) with a strong Christian-missionary presence. Later, its use is initiated along with the “tairari”. The tairari is a song through which the Guarani people express their strong feelings in a few words. The traditional violin Guarani- Chiriguano is big, fine manufactured and with characteristics rather flat.

There are three types of violins amidst theGuarayu: The European style violin, the “yata miori” and the “takuar miori”. The violin with European shape is used at church and linked to ecclesiastic music. On the contrary, the other two violins are used outside the church although their performance is connected to some religious repertoires. The “yata miori” is entirely made up of a piece of thick “takuara” whereas the “takuar miori” has mixed characteristics due to its similarity to the European violins when it comes to the handle, yet the resonance box is made of “takuara”. It is possible that these two types of violins might have been made as learning instruments; therefore, its use has been popular. The use of the violin among the Guarayu has sacred characteristics because of its ties to church.

It is also remarkable the use of the violin amid the “Chiquitano”. This one has formal European characteristics even though manufactured locally. Its use is not regulated by an annual calendar because it is played the whole year. However, it has a ritualreligious bond associated to (1) the church and (2) religious services at home specially during important events such as the death of some people or the Cross burial. The violin tradition among the “Chiquitano” is associated to the “sol-fa masters” or masters that read music and are tied to the church. As a result, it is said that it´s a “round year” instrument.

The violin amidst the “Mosetene” was introduced in the 18th century by the Franciscan missionaries. Though its use has been traditionally linked to church, many violinists perform repertoires not precisely religious. This instrument has a rustic shape because it is built using machete.

The violin among the “Mojeño” is tied to church and religious services. Introduced by the Jesuit missionaries during the 17th century, it is an “under oath” instrument; in other words, it cannot be used at profane festivities or outside religious services. Consequently, it is played by the musicians of the indigenous chapel who are very prestigious due to the fact that are considered as guardians of the ecclesiastic traditions and for being able to reading music (sol-fa). The music masters of the chapel orchestra are also “under oath”; as a result, they are not allowed to play outside the church. The “Mojeño” violin manufactured locally, is formally similar to Europeans violins, though some variations.

Amid the Chaco mixed race, the violin is a musical instrument played all the year. In fact, the use of the violin among the “Chaqueños” is associated to events that are part of the daily life, to the cattle brand, festivities, marriages, entertainment, horseracing, musical genre and regional dances such as “the chacarera” or “the cat”. The chaqueño violin is formally similar to the European violin yet different to the guarani violin and the Eastern-chapaco violin.

At the Quechua valleys of Cotagaita, Potosi, the use of the three cords violin is still preserved (kind of survival since the old brand). Built of local wood, it is used in Eastern until San Pedro festivity; however, it may prolong a little bit more due to the fact it is a musical instrument that goes along with the brand of the small cattle (goats,sheep) and the large cattle(bovine specially), which takes place in August.

It´s a great variety of violins repertoires, ways of using the bow, managing this instrument; so the general public will be able to appreciate all of that during the 16th version of the Luz Mila Patiño National Festival, an event that is going to take place on August 19-22,2010 at the Centro Cultural Simon I. Patiño, whose main focus for this next version will be the generation of an encounter space among the greatest masters of violin from native indigenous villages of Bolivia.